Write Your Story With Code

To write some Javascript and test it out, we’ll be using a site called jsbin.com.

It’s very easy to use.

There is code on the left side, that’s where we will write our Javascript. We can use something called

to see the results. And the results will show on the console, which is the right side.

Head to jsbin and click run, then see if you can complete the exercise.

My name is a variable

OK but there are different types of things we can put inside variables. They are called data types. Let’s learn about those with more activities.

Functions allow Javascript to perform tasks. Using a function is basically like casting a spell

We’re going to use a site called JSbin to examine some functions. Head over there and click run to try it.

Turn Into A Pumpkin

Head on over to Jsbin and click “run.” Then try it yourself!

Head back over to Jsbin and run the code. Did you get the answer you expected?

Can you fix it?

Most APIs have something called documentation, which tell you the correct way to use them. You can find Facebook Messenger’s here. I’ll tell you a bit about how to use it, but feel free to browse around.

For now let’s take a look at Button Template. The Button Template is one of several different message templates available for Facebook chatbot messages. You saw it used in our test messages. If you scroll down you’ll see what you need to send to the API to create one. Take a look at it. While it might look a bit complicated, it’s made up of what we just saw before. What data types do you see?

Examine the Documentation Discuss what the example parts might mean and what data types they contain. See if you can find an example of a:

Head to jsbin. See if you can get the myFunction to run and get you the secret code word. Then see if you can write your own function.

Check out lines 19-53 in your actions.js, see if you can get your chatbot to respond with the 4 secret messages coded in this code.

Add Your Story To A Function

Remember the example from the documentation? Well we won’t need to write anything like that because we are using a function that will format our message for us.

Checkout line 55 in your Glitch app to see the function receivedPostback. Head over to messages.js to check out the function it calls - sendButtons.

What arguments does sendButtons take? What kind of data does receivedPostback use when it calls sendButtons? What would you do if you wanted to add more buttons or change a message?

“you successfully triggered this”

“the buttons are:” your buttons

Think of action names for your questions that describe them but are simple lowercase words that are easy to code in, put them on yellow

notecards next to their corresponding question (the 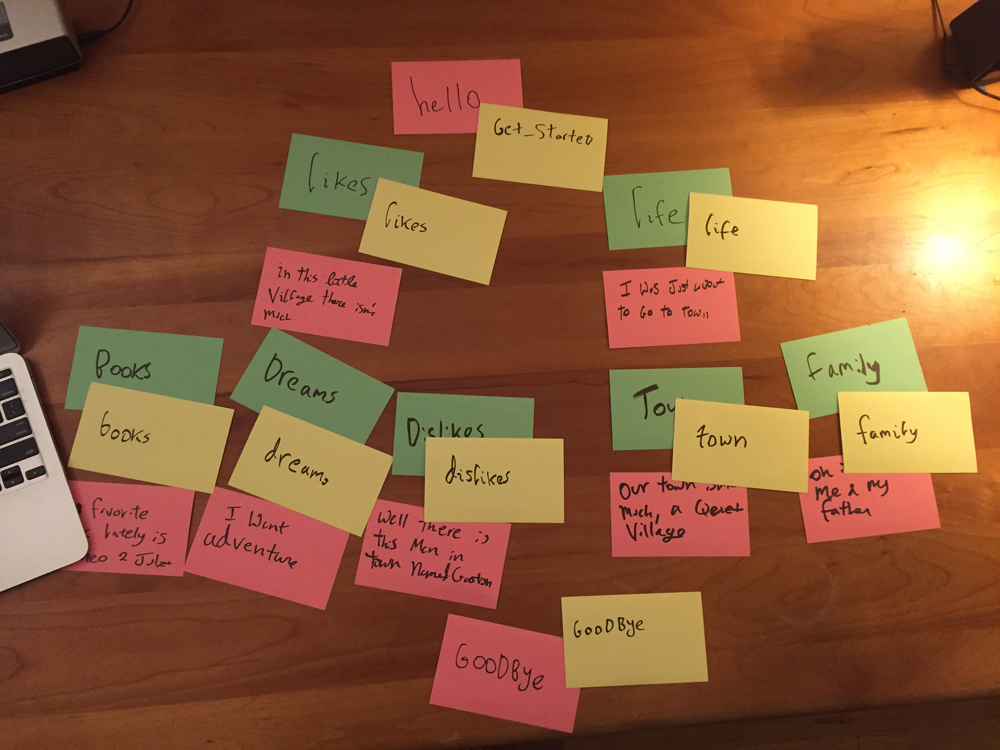 The example actions here are:

Now we’ll add them to our postback function, so that each time a button corresponding to the yellow cards we just created is pressed, the correct message and following buttons are presented:

The function should refer to the following green cards below it in the outline, or if there are no more left, to the goodbye message

These are already coded into the example app, you can simply change the wording. If you need more of them, you can copy and paste. Once you’ve finished it’s time to test your bot out. Does it work?

This page was generated by GitHub Pages.